An update rolling out now to Android users has updated the gun emoji to appear as a toy water pistol, in line with recent changes by other vendors.

It seems inevitable in retrospect.

While vendors might have baulked at Apple's overnight redesign of the 🔫 Pistol emoji in 2016; the tide has turned and now many won't want to be left on the opposite side of the fence.

Above: Google has replaced its pistol emoji design (left) with a new water pistol design (right) on stock Android devices.

In a move presumably intended by Google to minimize cross-platform confusion, this now makes the squirt gun / water pistol[1] the defacto design for the gun emoji.

Speaking on Emoji Wrap in 2016, Google product manager Agustin Fonts was cautious about changing the Android gun emoji to match Apple's new fluorescent green design, noting that they “want to be as compatible with other systems as possible”.

Regarding whether Google would re-assess the situation in future, Fonts added: “We’ll see.” Google art director Rachel Been echoed a similar sentiment in response to an audience question at emojicon:

“We believe in the cross-platform communication so we are maintaining our gun.”

It's now 2018 and the landscape has changed. WhatsApp released their own emoji font for Android which takes many cues from Apple, including a water pistol in place of a gun.

Samsung also switched out the gun for a new toy gun in its 2018 software release that comes on the new Galaxy S9.

Twitter, too, has jumped on board, with the latest release of its Twemoji set switching to a similar green squirt gun earlier this month. 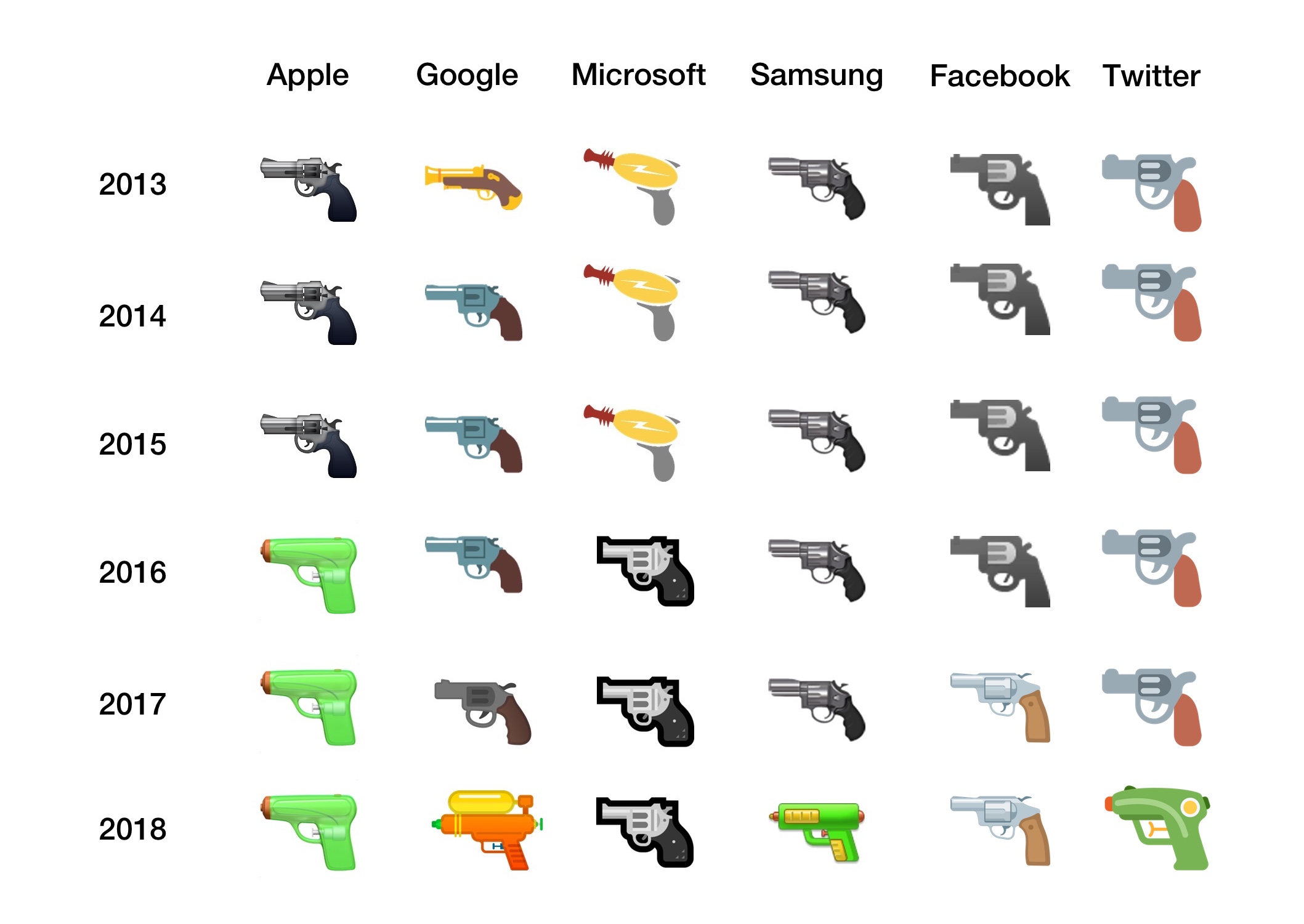 Above: 2018 has been a turning point for how the pistol emoji is displayed on many platforms. Image: Emojipedia composite.

Keeping true to the statements of 2016, Google seems to be aiming to ‘keep in line’ with other major vendors by choosing this time to switch.

With Apple, Google, WhatsApp and Twitter all now opting to display a colorful orange or green toy gun in their emoji fonts, what about the other major vendors?

A Facebook spokesperson confirmed to Emojipedia that a toy squirt gun will now be replacing the gun emoji design on Facebook platforms.[2]

The decision to make the change is to minimize issues with cross-platform communication, avoiding a scenario where a user may pick a toy gun from their native emoji keyboard on Apple, Google or Samsung devices, and have it show as a weapon on Facebook.[3]

Asked about the gun emoji on Windows, Microsoft declined to comment about future plans at the time this article was first published, but have since previewed a redesign.

It's worth noting that Microsoft were first to use a toy ray gun in place of a real gun for this emoji. Having brought it into line with other vendors once, it seems likely that they might opt to do the same again.

Above: Microsoft was the first vendor to show the pistol emoji as a toy gun, only switching coincidentally at the same time Apple made a change. Users can view a historical overview of any emoji on Emojipedia by clicking an emoji image as shown above. Image: Emojipedia

LG and HTC appear to have abandoned their respective custom emoji sets and now use Google's stock emoji designs. Mozilla's short-lived emoji project is on permanent hiatus for now, and Facebook's separate Messenger emoji set was discontinued in 2017, slowly being replaced with the standard Facebook set.

Other emoji projects in active development include EmojiOne and emojidex which both show a regular pistol at this stage.

Google updated their open source Noto Color Emoji repository with this new design today, and this appears to be rolling out to Android devices via Google's EmojiCompat library which allows emoji updates to be released separately from OS updates.

This emoji redesign will come standard as part of future OS releases from Google, starting with the next major release — presumed to be version 9.0 and nicknamed “Android P” until a name is announced.

Update 1: Microsoft will also be updating the Pistol emoji in a future release of Windows 10.

We are in the process of evolving our emojis to reflect our values and the feedback we’ve received. Here’s a preview: pic.twitter.com/BlB3yYTSht

No release date has been confirmed for this update, and as it is not in current Windows 10 betas, it's likely this won't arrive until later in the year.

We've updated our chart to reflect the (future) change from Microsoft alongside the other current updates: 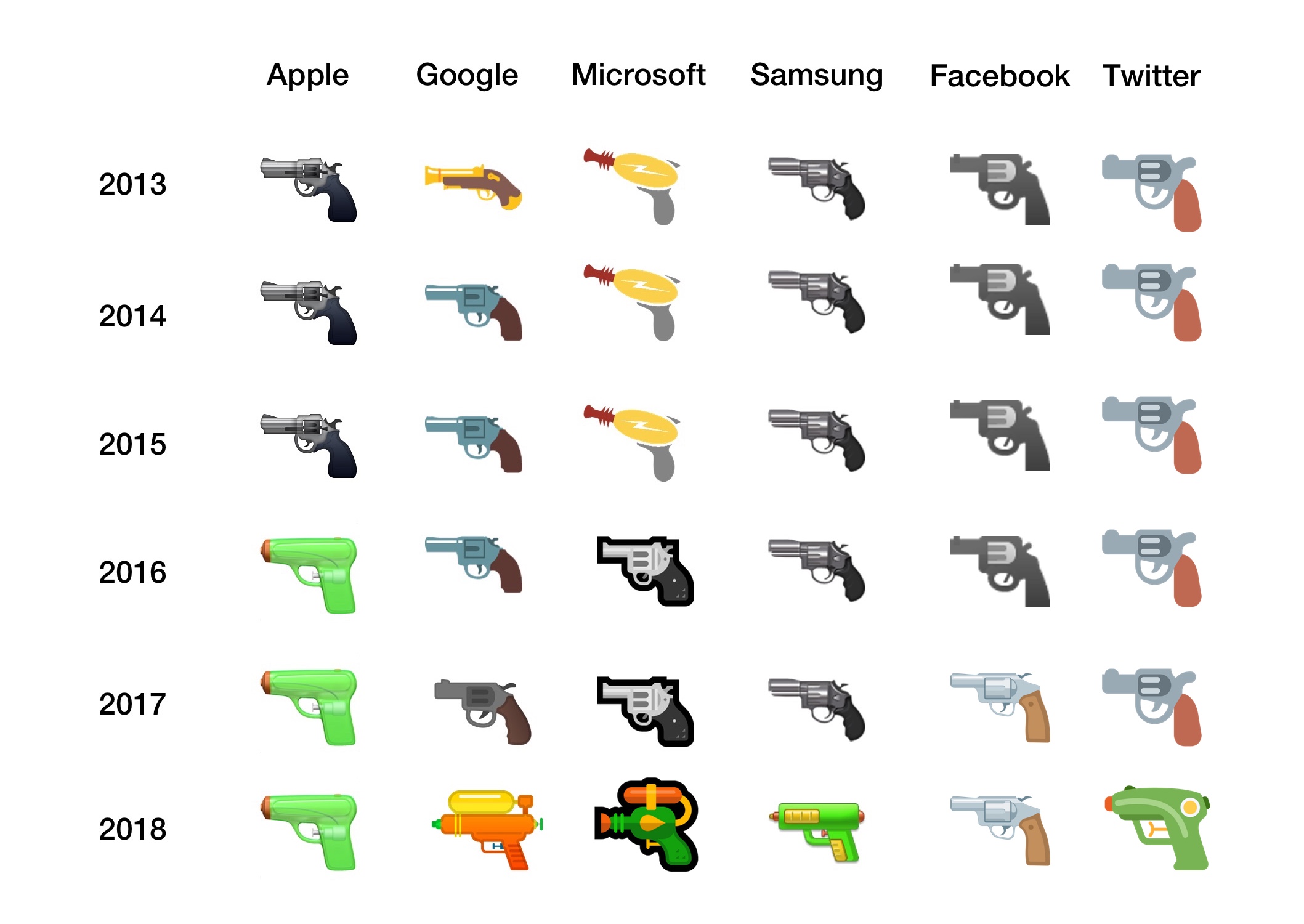 Above: A comparison of pistol emoji designs from major vendors 2013—2018. Now including the preview image from Microsoft for a future Windows release. 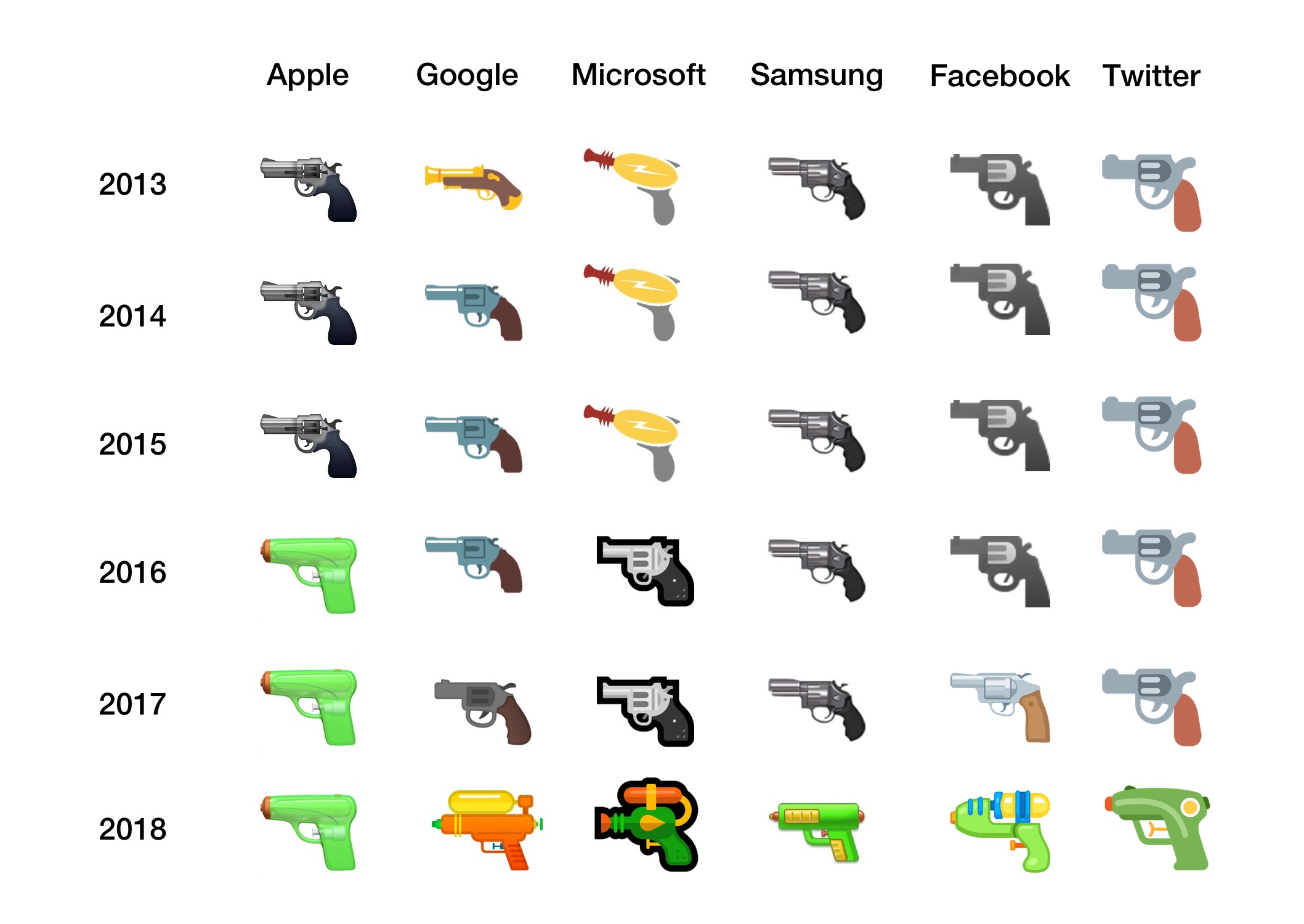 Above: A comparison of pistol emoji designs from major vendors 2013—2018. Now including the redesigned pistol from Facebook.