The longer I'm programming and creating software, the more I notice that I build a lot of stuff that requires maintenance even though it should not. In particular a topic that just keeps annoying me is how quickly technology moves forward and how much effort it is to maintain older code that still exist but now stands on ancient foundations.

This is not a new discovery mind you. This blog you're reading started out as a Django application many, many years ago, made a transition to WordPress because I could not be bothered with updating Django and then turned into two different static site generators because I did not want to bother with making database updates and rather wanted to track my content in a git repository.

As you can see the list of tools available is endless. Unfortunately though these tools are all aimed at programmers and it's very hard to use them as a someone without programming experience. Worse though: many of those are clones of each other just written in different programming languages with very similar designs. There is very little innovation in that space and that's a bit unfortunate because I like the flexibility I get from frameworks like Flask at times.

So I Built My Own

This is by far not the first time I built a static website generator but I hope it will be the last time. This one however is different from any project I built before. The reason it exists is quite frankly that it's impossible to escape family duties. For me that means helping out with the website of my parents. I knew that I did not want that to be WordPress or something that needs security updates so about two years ago I started to investigate that options there are.

After a ton of toying around I ended up using Frozen-Flask for that project. It was neat because it allowed me to structure the website exactly like I wanted. However it also meant that whenever text started to change I needed to spend time on it. Thus I had to investigate CMS solutions again. Countless weekends were wasted trying to make WordPress work again and looking at Statamic. However I found them quite a bit more complex to customize than what I was used to with Frozen-Flask and they did not really fit the format at all. Especially WordPress feels much more like a blog engine than a CMS.

Finally I decided to sit down and build something completely different: a content management system that uses flat files as source files like most other systems, but it has a locally hosted admin panel that a non programmer can use. You install the application, double click on the project, a browser opens and you can edit the pages. It builds in the background into static HTML files and there is a publish button to ship it up to a server. For collaboration one can use Dropbox.

I called this system Lektor and Open Sourced it initially a few months ago after not having cared about it in a year or so. However I had another run-in with a project which was the Sentry documentation. Sentry uses Sphinx for the documentation and customizing the docs for what we had in mind there turned out to be a complete waste of time and sanity. While Lektor is currently not in a position where it could replace Sphinx for Sentry it gave me enough motivation to hack on it again on weekends.

So I figured I might retry Open Sourcing it and made a website for it with documentation and cleaned up some bad stuff in it.

Here is what it looks like when you open up the admin panel: 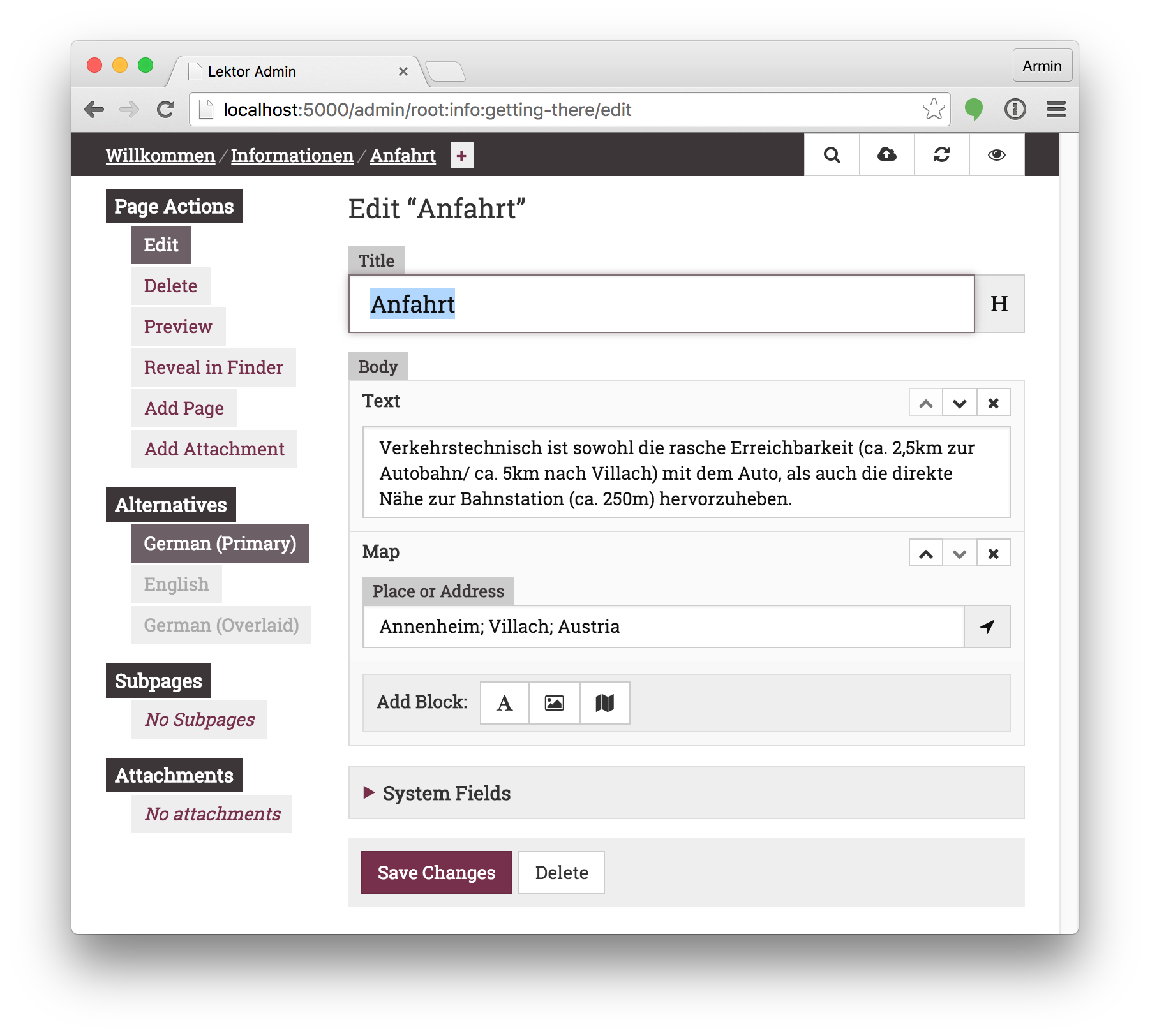 Lektor is a Framework

But what makes Lektor so much fun to work with is that Lektor is (while very opinionated) very, very flexible. It takes a lot of inspiration from ORMs like Django's. Instead there being a "blog component" you can model your own blog posts and render them with the templates you want to use. There is not a single built-in template that you have to use. The only thing it gives you is a quickstart that sets up the folders and copies default minimalistic templates over.

As an example, here is how a blog index template looks like:

The system understands what the blog is, that it has child record, that those records are paginated, it can provide pagination etc. However there is nothing in there that makes it a blog in itself. It just has a very flexible ORM inspired component that gives access to the structured files on the file system. Programming for Lektor feels very much like programming something with Flask or Django.

If you want to learn more about it, there are quite a few resources at this point:

I hope people find it useful. I know that I enjoy using it a ton and I hope it makes others enjoy it similarly. Because I run so many Open Source projects and maintenance of all of them turns out to be tricky I figured I do this better this time around. Lektor belongs to a separate org and the project does not use any resources only I have access to (other than the domain name and the server travis-CI deploys to). So in case people want to help out, there is no single point of failure!

I hope I can spend some time over Christmas to do the same to my other projects to alter the bus factor of those.

There is far too much in Lektor to be able to cover it in a single blog post so I will probably write a bit more about some of the really cool things about in in the next few weeks. Enjoy!